Recently we announced the launch of a new class (Sewing Camp Power) in partnership with Jennifer Serr. Lots of people have had questions so we decided to put together a simply Q&A. Here’s the promo video we put together as well:
END_OF_DOCUMENT_TOKEN_TO_BE_REPLACED

Just a quick note to let you know that Amazon currently has the Craft Business Power ebook on sale for just 99 cents until midnight on the 26th. Be sure to snag a copy before the price goes back up. And if you’ve never seen our little promo video for it – here it is:

Ps. If you get the book, then you’ll also want to be sure to join our Facebook group so you can discuss it with us… https://www.facebook.com/groups/makesellgrow/

In this week’s video I discuss 3 powerful aspects of a great partnership and ask the question,

“Do you believe in the power of partnerships to grow your business?”

In this video I share 9 brainstorming strategies for Product Stacking as well as several worksheets that you can use. Let me know what you think!

Cinnamon and I made you a special video today announcing a bigger / better Craft Business Power project – we’re turning it into a full class that will occur from January 5th through 30th. I’ll share more details over the next few weeks, but we wanted to make this video to explain what we’re doing!

The Craft Business Academy course is being launched on www.pixiefaire.com. Special Note: If you purchase before December 1st you’ll get the Black Friday-Cyber Monday specials bonuses on Pixie Faire too! We hope you’ll consider joining us! You can learn about those here: www.pixiefaire.com/online-classes 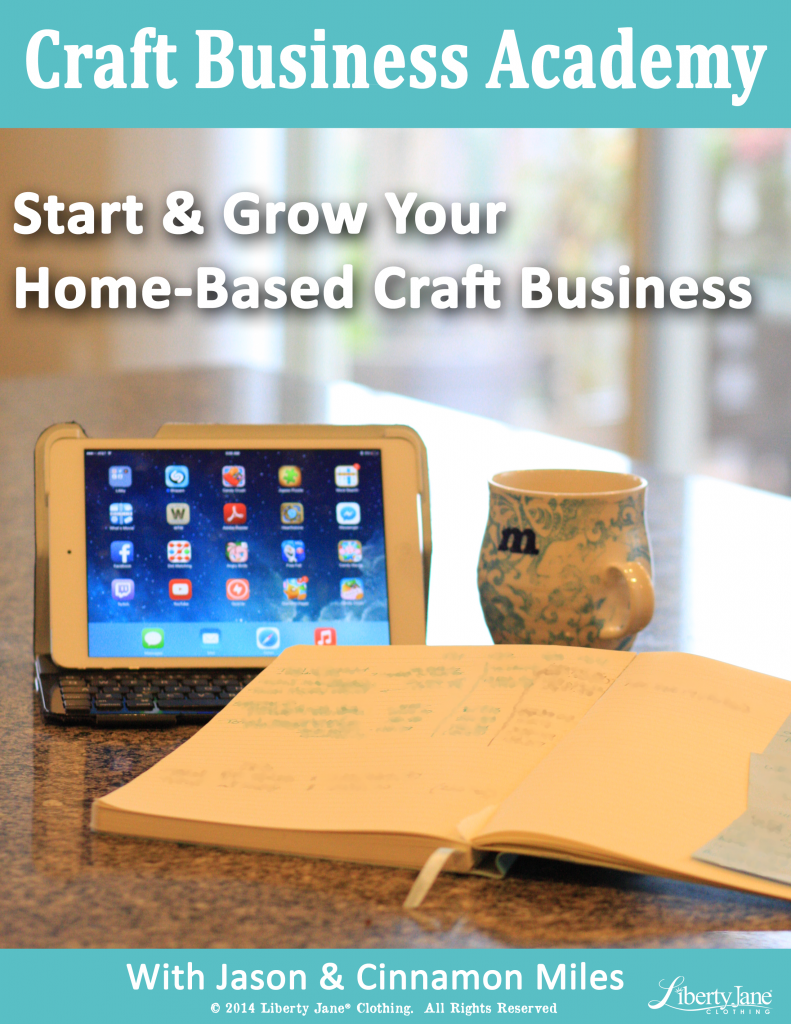 In this video I share a new special project – the relaunch of Craft Business Power. I’d love to hear whether Craft Business Power has helped you over the last two years! You can either leave a comment below – or if you’d like to be featured in the new book – please connect with us through the LJC contact form. I’ll reach out to you after getting your information.

In March of this year we started publishing our weekly newsletter with a commitment to doing it as a trial for 3-months to see how it would go. We are so grateful that many of you have tuned in regularly to learn about sales and marketing.

Today we are announcing a format change. We will continue doing the weekly newsletter but it is going to be morphed into a weekly video! From now on – We’ll be doing a short, practical, educational video each week. I hope you enjoy them. Let me know what you think about this first one – leave a comment below. Do you think adding rituals can help you improve your sales? 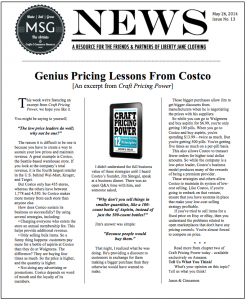 This week we learn a lesson from Costco’s founder Jim Sinegal and his incredibly genius pricing strategies.

Ps. Grab a copy of Craft Pricing Power on Amazon today. If you don’t have a Kindle you can still read it via the Kindle App for PC, MAC, Tablets, and Smartsphones. And – the paperback version should also be available any day now. Check Aamzon for that now.

Here is the full text as a blog post:

[An excerpt from Craft Pricing Power]

This week we’re featuring an excerpt from Craft Pricing Power, we hope you like it.

“The low price leaders do well; why not be one?”

The reason it is difficult to be one is because you have to create a way to sustain your low prices and maintain revenue. A great example is Costco, the Seattle-based warehouse store. If you look at the company’s total revenue, it is the fourth largest retailer in the U.S. behind Wal-Mart, Kroger, and Target.

But Costco only has 435 stores, whereas the others have between 1,778 and 4,550. So Costco makes more money from each store than anyone else.

How does Costco sustain its business so successfully? By using several strategies, including:

• Charging everyone who enters the store an annual membership fee. This helps provide additional revenue.

• Only selling bulk items. So a funny thing happens: customers pay more for a bottle of aspirin at Costco than they do at Walgreens. The difference? They are buying four times as much. So the price is higher, and the quantity is higher.

• Not doing any advertising or promotions. Costco depends on word of mouth and the loyalty of its members.

I didn’t understand the full business value of these strategies until I heard Costco’s founder, Jim Sinegal, speak at a business dinner. There was an open Q&A time with him, and someone asked,

“Because people would buy them.”

That night, I realized what he was doing. He’s providing a discount to customers in exchange for them making a bigger purchase than they otherwise would have wanted to make.

Those bigger purchases allow Jim to get bigger discounts from manufacturers when he is negotiating the prices with his suppliers.

This also allows Costco to transact fewer orders for higher total dollar amounts. So while the company is a low-price leader, Costco’s business model produces many of the rewards of being a premium provider.

These strategies and others allow Costco to maintain its system of low-cost selling. Like Costco, if you’re going to embark on that venture, ensure that you have systems in place that make your low-cost selling strategy profitable.

If you’ve tried to sell items for a fixed price on Etsy or eBay, then you understand the problems related to open marketplaces that don’t have any pricing controls. You’re almost forced to compete on price. 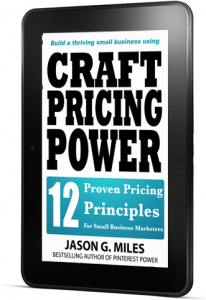 Tell Us What You Think!

What’s your opinion on this topic? Do you think Costco has got smart pricing? Tell us what you think! 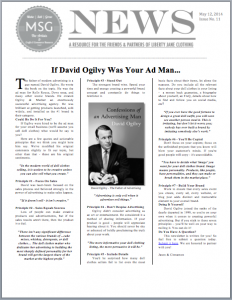 In this week’s Newsletter we look at 7 Principles from David Ogilvy – the Father of modern advertising – and we adapt them to doll clothes selling!

Here is the full text as a blog post:

The father of modern advertising is a guy named David Ogilvy. He wrote the book on the topic. He was the ad man for Rolls Royce, Dove soap, and many other iconic brands. He created Ogilvy & Mather an enormously successful advertising agency. He was brilliant at getting products launched, sold widely, and installed as the #1 brand in their category.

Could He Do It For You?

If Ogilvy were hired to be the ad man for your small business (we’ll assume you sell doll clothes) what would he say to you?

Here are a few quotes and actionable principles that we think you might hear him say. We’ve modified his original comments slightly to fit our topic, but other than that – these are his original sentiments.

In the modern world of doll clothes selling, it is useless to be creative unless you can also sell what you create.”

Principle #1 – Focus On Sales
David was laser-beam focused on the sales process and believed strongly in the power of advertising to make sales happen.

If it doesn’t sell – it isn’t creative.”

Principle #2 – Sales Equals Success
Lots of people can make creative products and advertisements, but if the sales results aren’t there, then the product is a dud.

There isn’t any significant difference between the various brands of …cake mixes, whiskey, detergents, or doll clothes… The doll clothes maker who dedicates her advertising to building the most sharply defined personality for her brand will get the largest share of the market at the highest profit.”

Principle #3 – Stand Out
The strongest brand wins. Spend your time and energy creating a powerful brand concept and constantly do things to reinforce it. 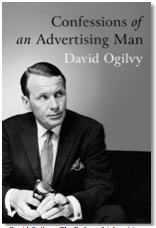 David Ogilvy – The Father of Advertising

Advertising is only evil when it advertises evil things.”

Principle #4 – Don’t Despise Advertising
Ogilvy didn’t consider advertising as an art or entertainment. He considered it a method of sharing information. If your product is good – people will appreciate hearing about it. You should never be shy or ashamed of boldly proclaiming the truth about your work.

the more persuasive it will be.”

Principle #5 – Include Details
You’d be surprised how many doll clothes sellers fail to list even the most basic facts about their items, let alone the nuances. Do you include all the relevant facts about your doll clothes in your listing – a money back guarantee, a biography about yourself, an FAQ, details about how to find and follow you on social media, etc?

If you ever have the good fortune to design a great doll outfit, you will soon see another person steal it. This is irritating, but don’t let it worry you; nobody has ever built a brand by imitating somebody else’s work.”

Principle #6 – You’ll Be Copied
Don’t focus on your copiers; focus on the unfinished projects that you know will blow your customer’s minds. If you’re good people will copy – it’s unavoidable.

You have to decide what ‘image’ you want for your doll clothes brand. Image means personality. Products, like people, have personalities, and they can make or break them in the market place.”

Principle #7 – Build Your Brand
Work to ensure that every sales event you create, every ad, every website, or blog post adds distinct and memorable element to your overall brand.

David Ogilvy joined the ranks of the dearly departed in 1999, so you’re on your own when it comes to creating powerful advertising. But if you stick to these seven principles – you’ll be well on your way to nailing it. You can do it!

Do You Have A Question?
This newsletter is written for you! So feel free to submit a question today. Submit it here. We are honored to partner with you! 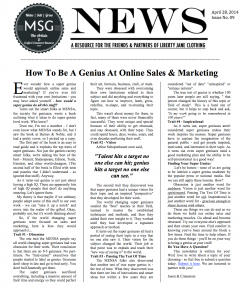 The Newsletter Is Online

In this week’s newsletter we answer an interesting question – what if a super genius was going to do the sales and marketing for your online business? What if they were trying to sell doll clothes or other crafts online? What would they do and how can we learn from them?

We hope you enjoy this issue,