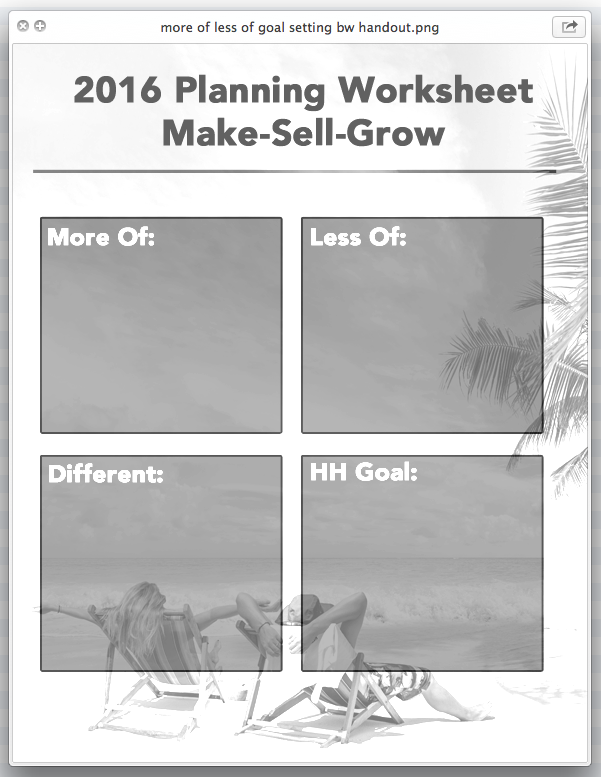 This week I’m working on my 2016 planning using an old method I learned somewhere along the way. It’s called “More Of, Less Of, Different”. I thought I’d make you a little worksheet so you’ll have a good resource to use as well. I’ve added it as an 8X10 PDF file so you can print it out easily. Here is what it looks like. Let me describe each section briefly.

More Of: The more of category is the section where you list the things or activities you want more of in 2016. I generally look back at 2015 and ask the question, “what went well in 2015 that I want to make sure happens even more in 2016”

Different: The different category is the section where I list what things that worked okay, but should be done differently. I look back on 2015 and ask the question, “what worked okay in 2015 that could work better in 2016 if we did it differently?”

HH Goal: The High-Hard Goal section is where I list my big aspiration for 2016. The phrase “high hard goal” comes from the book Bold by Peter Diamandis the famous creator of the Ansari X Prize. It’s a book that really inspired my in 2015. The HH Goal is where I ask myself, “if there was one thing I could imagine that would really be a break-through, what would it be?”

What’s my outcome? Here’s how I used this tool to plan my 2016. I won’t bore you with the details related to each concept, but I have specific plans and details for each of these.

More Of: Partners and products. I’m excited about launching several private label brands in 2016 – and several new product lines. You’ll hear more about these over the next few months.

High Hard Goal: I’m going to try to push for a 7 figure year (revenue exceeding 1 million) for our core business Liberty Jane/Pixie Faire and a 7 figure year for Sew Powerful as well.