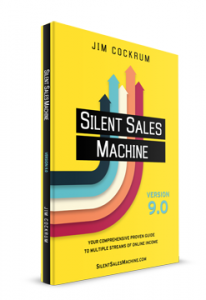 Several months ago my mentor (Jim Cockrum) asked if we would update our story in his book (Silent Sales Machine) as he prepared to release version 9.

Jim has been our closest mentor/coach/guru for the last 7+ years – so we were happy to include our story.

What we wrote for him was (a rather lengthy) testimonial – and he graciously published the whole thing! It includes the story of our greatest struggle (the summer of 2009) and our annual revenue results from 2008 through 2015, (information I don’t share too often).

Get it for free: S0 funny timing – a couple weeks ago his team let us know that he would be giving the Kindle version of his book away for free starting today, October 22nd and ending October 26th.

[sidenote – Cinnamon and I are celebrating our 21st wedding anniversary today. Don’t worry – we are leaving in an hour to go spend the day in Seattle.]

Jim’s giving away a lot – he’s giving everyone the Audio Recording (read by him) of his book and a free ticket to his $97 Email Marketing (List building) Course. All Free – because he’s a honestly a good guy.

So I can’t help but be reminiscent and grateful today as I think about all of this stuff. So rather than just tell you to go get Jim’s ebook because it’s free – I decided to try to out-give my mentor.

So I set up a little contest. Simply enter via this contest form (below) and enter by downloading his ebook. I’ll pick one person and give them a free ticket to my upcoming Craft Selling Academy class (which kicks off in November 2nd). Note the contest starts at 11am Pacific / 2pm Eastern today (October 22nd). So don’t download the ebook until the contest form opens at 11. Also — if you don’t have a Kindle – you can still read the ebook straight from your computer, iphone, Android, or tablet – you don’t need a kindle.

I hope you’ll take the time to read Jim’s great book – and go through his email marketing course. What he has to say could change your life – as it did ours.

Let me know if you have any questions – we are here to serve you – and it’s an honor!

23 Comments on Can I out-give my mentor?